No sooner did I post (and brag) about being back in the Quilting Saddle than I was given about 5 minutes to move/relocate my ENTIRE quilting/sewing studio due to severe water damage in the walls of said studio!  Needless to say, not only did I go into panic mode, but I was totally ticked, to put it mildly, that I had just spent almost 3 full months during the Thanksgiving/Christmas/New Year's holidays sorting and organizing and moving EVERYTHING in my studio so I could start the New Year off right - Finally, being completely organized and ready to quilt...NOT!  Now, everything is piled up in piles throughout my entire house.  Check these out: 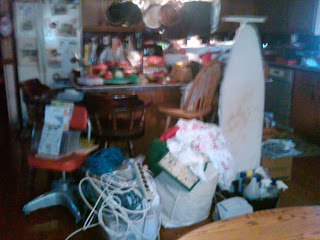 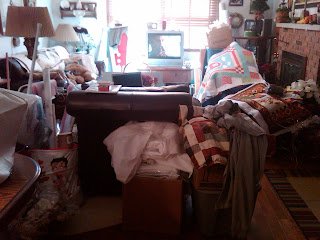 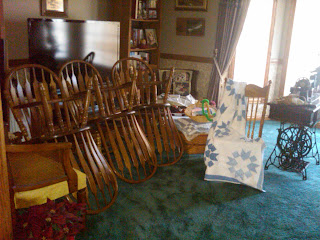 The Hub's TV room (I did eventually move the dining room chairs out from in front of the big screen after making him suffer for a few hours ;-) 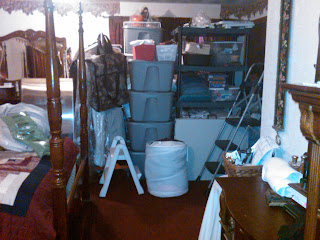 and finally - the master bedroom!

This is the very LAST time I allow the hubs to manage a construction project.  While he is a terrific farmer, home renovation projects are just not his forte, obviously ;-)  Since I finally got word from the contractors they won't be finished for at least 3 more weeks, I opted to set up my machine quilting frame where the dining room table sits, especially since I don't believe I will be cooking those large family dinners anytime in the near future (just ask me how I know?!)

UPDATE Part III:  It is now November 6, 2012, and STILL NOT DONE and I now have NO idea of when it might be.  I'll let you know if/when this quilting studio is ever finished...and the saga continues...

And, she fits in there just fine: 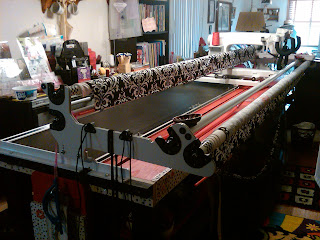 In fact, I may just leave her here for awhile ;-) 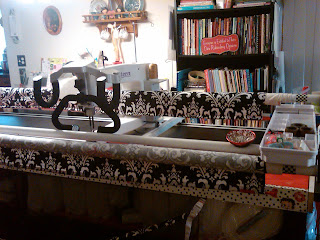 Wonder if the family will figure out we may not be having Easter dinner at our house this year - can anyone say, Reservations Please!

EVERY Quilt has a Story...

About Little Bit About Me